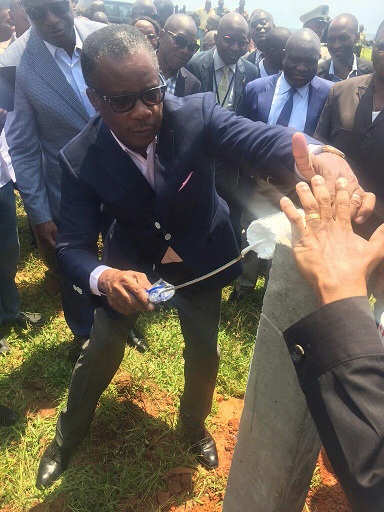 Following the launching of the preliminary land survey process last December, the official ceremony for the launching of the delimitation and benchmarking of the Pointe-Noire Special Economic Zone was held on Wednesday January 25, 2017 in LOANGO the headquarters of Kouilou prefecture. It was enhanced by the presence of members of Government involved in this project.

In addition to members of Government already mentioned, the departmental and municipal authorities of Pointe-Noire and Kouilou took part in this ceremony. The official ceremony was marked by three speeches :

A word of welcome from the sub-prefect of Loango

In his speech, the sub-prefect of Loango warmly welcomed members of Government to Loango. He then thanked the political and administrative authorities for honouring their presence at the ceremony. These thanks went particularly to the President of the Republic, who in his Society project "the March towards the Development" advocated the diversification of the economy through the creation of Special Economic Zones. The creation of Special Economic Zones, particularly in the Pointe-Noire area, is an important solution to the issue of youth employment.

Finally, the sub-prefect wished government authorities and the departmental and municipal authorities best wishes for the year 2017.

The speech by the Minister of Special Economic Zones

Speaking to the audience, the Minister first defined the stakes of the ceremony, which is no more than the logical continuation of the work already begun on the futuristic project. Implementation of the Pointe-Noire Special Economic Zone requires planned actions. These actions contribute to the revitalization of local economies and to improvement of social conditions, he added. The purpose of the action concerned so far has been to underline the work of delimiting boundaries and the layout of signs which will not only enable an objective assessment to be made of the level of execution of the works, but also to have a clear idea about the continuation of operations.

Then the Minister also spoke of the visit of the Chinese Foreign Minister within the framework of cooperation between the two countries. During this visit, the Pointe-Noire Special Economic Zone project was included in its agenda and was one of the subjects of discussions with Congolese authorities.

Finally, the Minister reiterated the interest of this ceremony, which is the beginning and the continuation of a mobilization, in order to bring about strong, voluntarist and enthusiastic reaction of the actors (Government, local populations and partners etc.) in order to elicit actions through a spatial approach. He emphasized that this project will generate employment for young people, and must be taken seriously, he concluded.

The speech by the Minister of Land Tenure and Public Property

Speaking in the official launching speech, the Minister first set objectives of this meeting and expressed his joy for those who responded to this invitation.

He then presented work already carried out by the mapping and topography departments, while recalling Law 11-2004 of 26 March 2004, which determines lands to be expropriated. He also referred to declarations of public utility of 26 December 2009 and 21 December 2016 requiring compliance with relevant procedures.

The Minister also asked purchasers and all owners who are within the 30km2 zone declared of public utility to be identified according to decree 12-535 with the preliminary land investigation commission of the sub -prefecture of Loango. They shall be granted one (1) month after which no claim can be made.

The ceremony was followed by the visit of the sub-prefecture of Loango, headquarters of the preliminary land investigation commission, the ministerial delegation went to Nkounda for the planting of pillars delimiting the special economic zone and to acknowledge the concerned sites which extends over an area of 30km2.