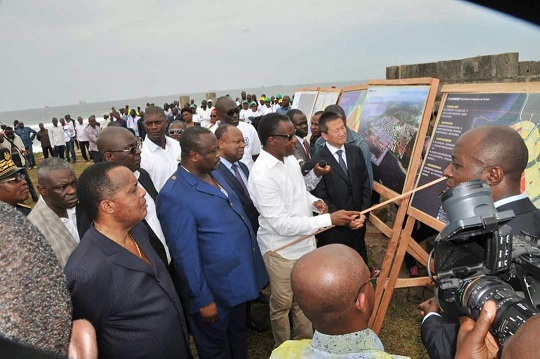 On May 16, 2017 President Denis SASSOU N’GUESSO visited the site where the special economic zones will be built. It is a big project which will boost the Congolese economy and create around 100,000 direct and indirect jobs.

The Head of state of Congo visited the site, which has an area of 36 km2  bordering the Atlantic ocean, in the presence of  honourable Alain Akouala Atipault, Minister of  Special economic zones, honoura-ble Jean Jacques Bouya, Minister of Land use planning and heavy construction and the Ambassador of China in Congo, His Excellency Xia Huang.

The President followed the way the delineation work and was determined to visit the site. We consider this as the President’s political will and as a green light so that the process keeps going on», Minister AKOUALA ATIPAULT said.

The Congolese Government and the Chinese Development Bank  signed a memorandum of understan-ding in July 2016 on the undertaking of a feasibility study, the mode of investment and the financing of  the special economic zone of Pointe Noire.

The special economic zone of Pointe Noire will have a set of infrastructure, among which a mineral port, chemical and refined oil products plants, metal, food and drinks industries, fertilizers industries, timber and other products industries.

The project is part of the Government’s policy to diversify the economy, which basically depends on oil revenues. There is a plan to create four special economic zones, specially in Pointe Noire, Brazzaville, Oyo-Ollombo and Ouesso.

Development and earthmoving works relating to the site of Pointe Noire will start by the end of this year.