ALAIN AKOUALA ATIPAULT and ZHOU CHAO talk about the next stage 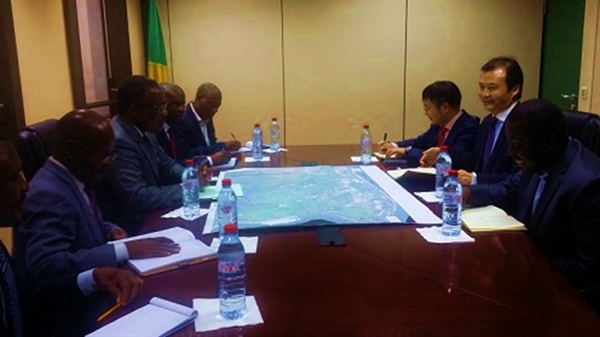 A Chinese delegation led by ZHOU CHAO, Deputy Chairman of the Africa- China development Fund, worked last March 17 with the Minister of Special Economic Zone, Honorable Alain A KOUALA ATIPAULT, in order to take stock on the commitments made and on the marking of the boundaries of the said zone in Pointe Noire.

«We talked about the process of identification of the owners and of the property which is underway in Pointe Noire and the next stage of Chinese experts task, said Honorable Alain AKOUALA ATIPAULT.

He added that : «the identification process is coming to an end soon. Then the next important stage will be the launching of the investigation on plots of land to check if the information collected is reliable». He concluded by saying that: «the delegation has reaffirmed its confidence about the economic viability of the zone(SEZ) going to be created in Pointe Noire. The delegation will make a presentation on the industrial development and town planning plan.»

Actually, after the launching of the investigation as a pre requisite in December 2016, the works on the marking of the Special Economic Zone in Pointe Noire is a turning point in the implementation of the project which is very dear to the Congolese government. The project is also mobilizing the partners of Congo such as China.

Let us remind that the Special Economic Zone of Pointe noire is going to cover an area of 30km2., once the marking of the area will be completed. The China-Africa Development Fund. The fund is a Chinese initiative. On the occasion of the Africa-China Summit held in Johannesburg in December 2015, Beijing pledged for an amount of 60 billion dollars of aid for Africa as a loan. The loan will be used to finance cooperation programs, especially in the industry sector. Congo would like to seize this opportunity to promote its development.

The loan is the first special Chinese placement fund in Africa. From its inception up today, the Fund has allowed the involvement of Chinese companies in Africa, making China the first partner of Africa.